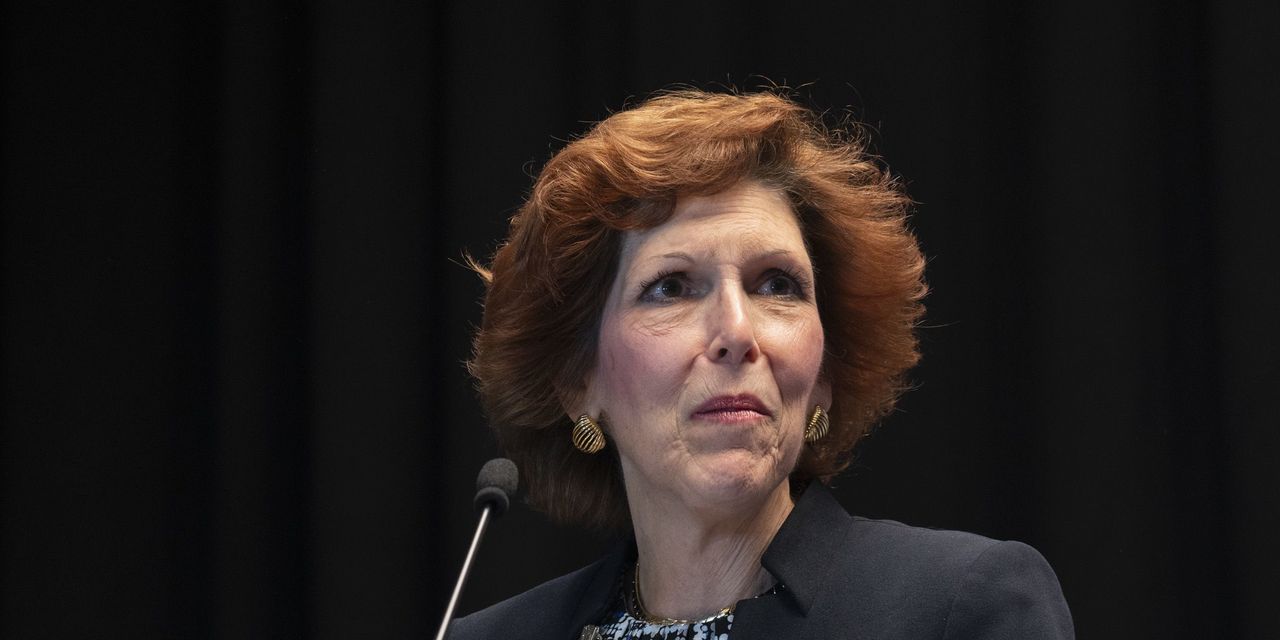 In a virtual address to the European Economics and Financial Center in London, Mester made clear that she supports rate hikes this year, beginning in at the next meeting on March 16, given the high inflation readings and strong labor market.

“The task before us is to remove accommodation at the pace necessary to bring inflation under control,” Mester said.

Some on Wall Street have raised the possibility that the Fed would raise rates in March by 50 basis points, but Mester said she didn’t see a “compelling case” for such a large move.

“We’ve got to be a little careful. Because…even though you can well telegraph sort of what’s coming, when you take the that first action, you know there’s going to be a reaction,” she said.

Looking at the terminal rate — where the Fed’s policy rate rise will be the last one in the rate hiking cycle — Mester said that with the economy doing so strongly, the Fed might have to raise rates above neutral – which is estimated at a 2.5% policy rate.

Moving above 2.5% would mean that policy is aiming to restrict economic growth. This is not the “soft landing” scenario for the economy envisioned by Fed Chairman Jerome Powell at his press conference after the last Fed meeting in January.

Given how strong inflation is, moving the policy rate above neutral is possible, although of course these decisions don’t have to be made immediately, Mester said.

Mester, who is a voting member of the Fed’s interest-rate committee this year, said that economic data would dictate the pace and size of coming rate hikes.

The last time the Fed began to remove monetary accommodation in 2015, it was a very gradual process, with the Fed’s policy rate only reaching 2.3% in December 2018.

“This time, I anticipate that it will be appropriate to move the funds rate up at a faster pace because inflation is considerably higher and labor markets are much tighter than in 2015,” Mester said.

If by mid-year, it looks like inflation is not going to moderate as expected, “then I would support removing accommodation at a faster pace over the second half of the year,” she said.

“On the other hand, if inflation moves down faster than expected, then the pace of removal could be slower in the second half of the year than in the first half,” she added.

It is also appropriate to shrink the Fed’s balance sheet sooner and at a faster pace than during the last tightening cycle in 2017-2018, Mester said.

The Cleveland Fed president said she would support outright sales of some of the $2.5 trillion in mortgage-backed securities on the Fed’s balance sheet.

Overall, policy transitions like the present one are often met with some volatility in financial markets, and come with challenges and risks, Mester said.

“My expectations are that these transactions will be successful, inflation will come under control, and the economic expansion will be sustained,” she said.

Mester said she expected strong U.S. economic growth this year. The economic impact of the omicron variant of the coronavirus will likely be short-lived, she said.

were higher on Wednesday, continuing to retrace some of their losses of January when fears of higher interest rates dominated trading. The yield on the 10-year Treasury note
TMUBMUSD10Y,