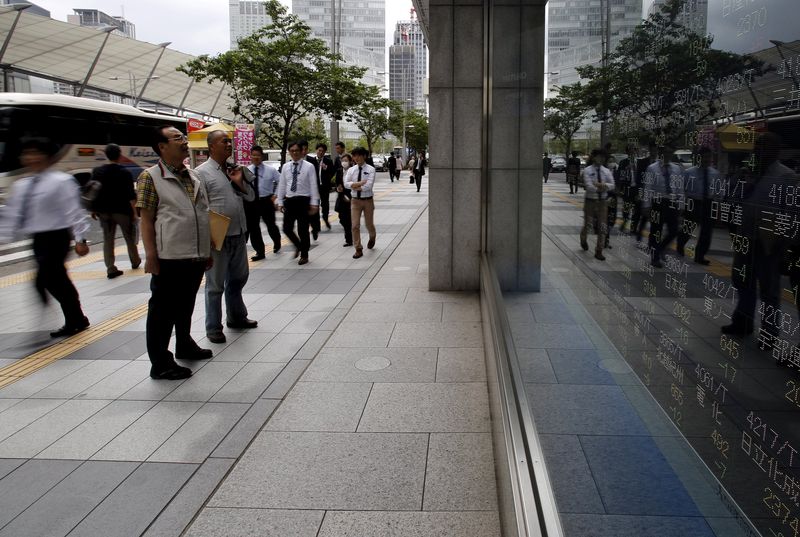 Investing.com – Asia Pacific stocks were mostly down on Monday morning, with bonds continuing a selloff as investor concerns about inflation and monetary tightening continue. However, incumbent Emmanuel Macron is in the lead after the first round of the French presidential vote.

Investors breathed a sigh of relief over the results in France, but questions remain as to whether Macron can maintain the lead against rival Marine Le Pen in Apr.24’s runoff.

“Today, the mantra for many investors is ‘Don’t fight the Fed when it is fighting inflation,’” Yardeni Research president Ed Yardeni said in a note.

“We agree with that, but it’s not as bearish as it sounds,” in part because accumulated excess liquidity and an inflation boost to earnings are beneficial for stocks, the note added.

Cleveland Fed President Loretta Mester said she is confident that the U.S. will avoid a recession even amid tighter policy, although the inflation rate will likely remain at more than 2% into 2023. Chicago Fed President Charles Evans will speak later in the day, followed by Richmond Fed President Thomas Barkin a day later. Mester and Philadelphia Fed President Patrick Harker will speak on Thursday.

The war in Ukraine precipitated by the Russian invasion on Feb. 24, a hawkish Fed, and the ongoing COVID-19 lockdowns in China also continue to drive investor concerns.

Russia appointed General Alexander Dvornikov as the new commander for its military operations in Ukraine, in a bid to refocus its war effort after failing to secure territory around Ukraine’s capital, Kyiv. Russia will also halt bond auctions for the remainder of 2022 due to prohibitive borrowing costs and Western sanctions. European Union foreign ministers will meet, with further sanctions against Russia on the agenda, later in the day.

A slew of central banks will hand down policy decisions within the week, starting with the Bank of Canada and the Reserve Bank of New Zealand on Wednesday. The European Central Bank and the Bank of Korea will follow a day later.