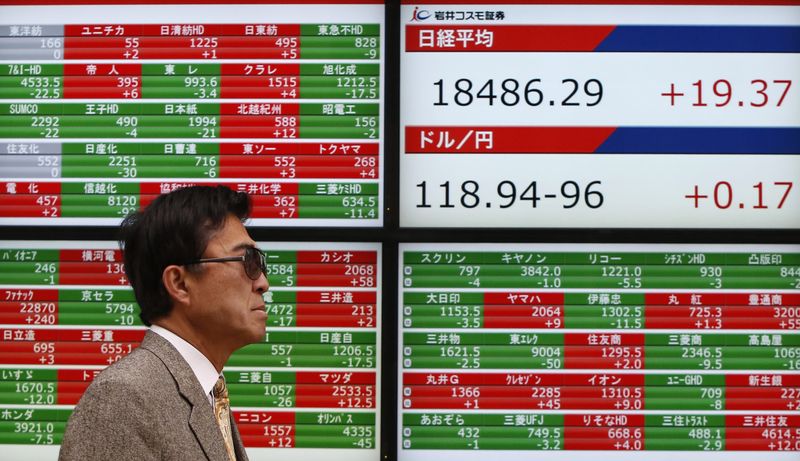 Investing.com– Most Asian stocks fell further on Tuesday as technology majors remained under pressure from new U.S. export curbs and a hawkish Federal Reserve, although Chinese indexes were supported by a couple of strong earnings forecasts.

The Taiwan Weighted Index, which is heavily exposed to Chinese chipmaking stocks, slumped 4% to a near two-year low after the United States announced measures limiting their access to certain U.S.-made technology. The move points to more headwinds for Asian chipmakers and could also potentially worsen ties between the world’s two largest economies.

Major Chinese semiconductor-linked stocks, including Anji Microelectronics Tech (SS:688019), tumbled over 10% and were the worst performers on the blue-chip index.

The shipping giant forecast an over 40% jump in its profit attributable to shareholders for the nine months to Sept 30, citing improved freight rates. CATL, which supplies batteries to electric carmaker Tesla Inc (NASDAQ:TSLA), said it expects its third-quarter earnings to nearly triple on increasing demand for electric vehicles across the globe.

The two forecasts helped improve sentiment ahead of the third-quarter earnings season, even as China’s economic prospects appeared to be dimming. A resurgence in COVID-19 cases has investors fearing more lockdown measures ahead of the Communist Party’s 20th Congress later this week.

China’s Shanghai Shenzhen CSI 300 index rose 0.5%, while the Shanghai Composite index added 0.4%. Focus this week is on local inflation and trade data for more cues on a potential recovery in the Chinese economy.

Asian markets marked a weak start to the week, which was worsened by hawkish signals from Federal Reserve Vice Chair Lael Brainard on Monday.

Brainard said the central bank has no intentions of a dovish pivot in the near-term, and will only ease its hawkish stance when it is convinced inflation is on the lam.